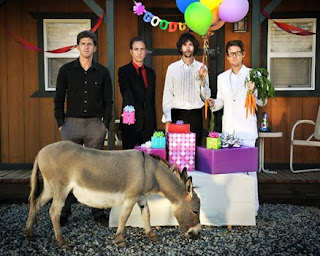 The 88 has been churning out the alt pop songs since 2008, with a sunny CA vibe from their LA roots that seems infused in everything they do. Named after a song by the French Kicks and the fact a piano has 88 keys, the band’s hits such as “Coming Home” and “Go Go Go” are infectious tunes featured in commercials, TV shows and films that instantly get stuck in your head. Now reformed as a four piece, they just wrote and recorded the opening theme song for NBC’s “Community” and went on tour with the iconic Ray Davies. Their strong presence on screen just seems to fit in with their proximity to Hollywood -- Keith Slettedahl recently called in from there to talk with PopMatters about their new album.

The new album is self-titled – why choose to call it The 88 now?
It’s so different now -- I think the only alternative is to change the name of the band. Everything feels the most complete it’s ever been and the most fun it’s ever been, so it seemed like a new beginning too. To just give it name and lump it in with the other ones wouldn’t feel so right. Todd (O’Keefe, the bass player for the band) came into the studio when we were recording it and said he had a name for the record, but he wanted us to guess. We were like, how are we going to guess? But he said, “no think about it” and we all knew that it was the right thing to do.

Your band wears the alternative mantle well, yet you’re masters of catchy tunes. But underneath the surface are complexities that require serious musicianship, are there classical or jazz training in the band’s background?
No, the guys are just really, really good. The music that we like is older music, when the musicianship was probably a little bit better. But I still like all kinds of music as well – it’s all relative. When The Beatles came out, people thought they were terrible musicians, but by today’s standards they are incredible! But I think it’s from the bands that we really love and we’re influenced by.
You and keyboardist Adam Merrin went to high school together – a classic band story – are those days filled with happy memories or were they more trying times?
Well they were fine, but actually we weren’t really close friends in high school. We knew each other and we were friends but we really didn’t start hanging out together until the last day of high school --that was when we did the first song together. He was a little ahead of me as far as his rebelliousness and I was still a really good boy. Adam was more of a wild card; he was already ditching school and doing other stuff. I wasn’t ready for that yet! But we always had the same taste in music and we would have little competitions here and there about certain bands, although we never really hung out that much till the end.