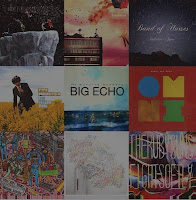 Summer is definitely here. Time for feel good tunes and relaxing on the porch. New CDs from The New Pornographers and The National also presented opportunities to see these bands in NYC, see separate write-ups in older posts below. Listen at the link here, enjoy!

1. 21 @ 12/Hot Hot Heat
Also blogged about how I waited months for this to come out after hearing it as an advance copy on kcrw.com's Morning Becomes Eclectic (where else?) I saved the top spot on my playlist for this kicker of a song from the decade-old Vancouver band. Its lead off siren of synths and happy shout outs of "hey" and "woo" makes me realize, who needs words in order to party down with a great song?

2. Let Go/Everest
This LA band isn't shy to embrace a solid rock format and for this song they've added strings as well. It's a lush sonic landscape with a hard hitting rhythmic romp from a band only a few years old, yet comprised of clearly accomplished musicians.

3. Excuses/The Morning Benders
Another west coast band, this time from Berkeley, CA. The Morning Benders embrace all things indie having toured in support of genre greats Grizzly Bear, Death Cab for Cutie and Ra Ra Riot. In a standard four piece band set up, the group expands to create an old fashioned wall of sound for this song. It even opens with the sound of a needle hitting to set the scene, before the entrance of crooning vocals complete with harmonies.

7. Animal Backwards/Minus the Bear
8. My Time/Minus the Bear
These two songs are off of the Seattle band's fourth full length release, Omni. The band is made up of group of five guys who like to venture away from the indie rock label, pushing the limits of experimentation into prog rock's inventive time structures. The name comes from an incident when a friend joked that his date was like the 70s TV show "B.J. and the Bear" -- minus the bear. For this CD, the band wanted to capture the live energy of playing together as much as possible during the recording process and it shows.

9. Terrible Love/The National
10. Bloodbuzz Ohio/The National
11. Conversation 16/The National
The National's fifth CD, High Violet is a huge success story for this band that's been cranking out the tunes since 1999, so they aren't just critic fav indie darlings anymore. These guys grew up in Cincinnati but are now based in (where else) Brooklyn. The line up includes two sets of brothers Bryan and Scott Devendorf along with Aaron and Bryce Dessner, who are even twins. Just listening to lead vocalist Matt Berninger's deep baritone singing over this group's mellow music makes my shoulders drop instantly into relaxation. Plus the lyrics are always worth investigating, whether they're referencing Dostoyevsky or ruminating over poetic imagery.

12. Factory/Band of Horses
13. Compliments/Band of Horses
Ben Brindwell's vocals are sweet and plaintive over his band's signature sound which is so reminiscent of 70s southern rock. The group was formed in Seattle back in 2004 but Brindell has since moved back to his native state of South Carolina and this third CD was recorded nearby in North Carolina. The swells that open "Factory" take me back to middle school crushes in its dreamy soundscape. "Compliments" rocks hard with a driving beat, the boot stomping kind that takes the listener down an open country road.


14. So Brand New/Fyfe Dangerfield
15. Faster Than the Setting Sun/Fyfe Dangerfield
This founding member of the UK indie band Guillemots is now best known for his cover of Billy Joel's "She's Always a Woman" which appeared on an 'advert' for a department store there. Originally from Birmingham, Fyfe Dangerfield released this solo CD earlier this year and it's also gaining notice with such romantic yearnings and lush orchestrations for a collection of pop tunes.

16. Closet Astrologer/The Ruby Suns
The Ruby Suns are an indie pop band from New Zealand, creating layered compositions since 2004. This song starts out with simple snaps over a meandering synth intro but then explodes with echoing vocals and rythmic variations. It makes me feel spaced-out for all the right reasons.