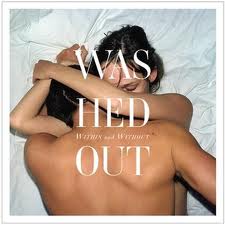 Yesterday I started my second annual Valentine's Day playlist and the thought of including a Washed Out song occurred if only for the sexy cover on the last album, 2011's Within and Without. (Not surprisingly, the photo seen below has also appeared in Cosmopolitan magazine.) Also, n.b. my concert review of their July 2011 show at Bowery Ballroom in NYC remains one of the most popular posts on this blog.

Earlier this week, the first new song since then was released as part of the Philips Sound of Creation project.  This corporate video uses this soundtrack for "an interactive musical story," where a split screen becomes a three-way and more.  A husky voiceover reminds visitors that "inspiration is inside you, and outside you, so let it in," inviting clicks to preview products. Hey we can all use a reason to heat things up in February, besides being happy about having something new from chillwave master Ernest Greene.

Consequence of Sound recently interviewed the frontman about this "autobiographical exploration of musical influences." It turns out that Greene incorporates natural sounds using field recordings in his songs since they are about "memories and nostalgia," while combining "both experimental and pop music."  A top ten listing of tracks that have inspired his musical journey so far include both Abba and Eno, along with The Beatles and The Beach Boys.  In fact, Greene considers The Beach Boys' "God Only Knows" to be the most creative track of all time. (And I would add that David Bowie's cover ranks extremely high in my list of most romantic songs of all time.)

Take a listen to "The Sound of Creation."